Birth of a Blog 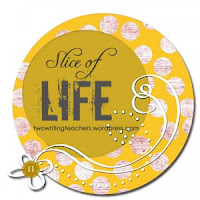 When I don't know what to write, sometimes I read or look back into all my old writers notebooks. I'm on my 11th notebook this year--how appropriate for 2011. I didn't realize I had a 10th writers notebook anniversary last year. Congratulations to my writers notebook!
I started my writers notebooks in the 2000-2001 school year. This was after I attended a number of after school writing workshop meetings. I basically wrote along with my students and whenever at home.
Tonight, I found writers notebook #1 and discovered the page on which I had title ideas for my notebook--everything should have a name, especially if you're going to live with it every day!
This was my list on 01/10/01:

Bits of a Rainbow

Fragments of My Imagination

Fragments
I starred the name "Clay Fragments." Thus, also, the name for my blog now. I had forgotten that I had made a list of names, but I remember thinking that the name had to be something that contained bits and pieces of writing that eventually would take some shape and then change, maybe over and over again until it took its place in print.
Voila!!!

Email ThisBlogThis!Share to TwitterShare to FacebookShare to Pinterest
Labels: Birth of a Blog-SOLSC