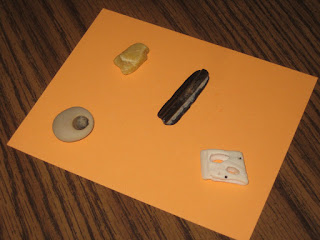 It's well known that I collect rocks.  My neighbor did not know how I really felt about rocks until one day last summer.  I picked up a rock while I was with her, and it was heart-shaped.  I never found one like that, and I remarked how cool it was that I had found it.

She took it from me, looked at it, and then threw it back into the garden dirt.  "What was that?" I asked myself.   I didn't know what to say.  Why she threw it back, I couldn't imagine.

I've known my neighbor for 23 years now, and you can depend on her for no matter what.  Her boys were my boys' friends.  She took care of our pets while we were gone.  She has a key to our house, and we to her home.  We've worked together at her business, and we've eaten plenty of meals together.

My neighbor looked down a bit and said, "It has to be somewhere near."  We both looked for a short period with no results.  We both laughed it off.  I looked again after she left and many times after that.  It was just a rock--but heart-shaped and pinkish!!!  We never said anything about it again, of course.  It was just a rock but disappointing, more about my neighbor than the rock!

My neighbor had been in Florida for three months this year and just got back last weekend.  She came knocking at my back door as usual and said she had some rocks for me from Florida!!!  She usually brought shells.

She handed me the four rocks, and said, "I found a heart-shaped one, but I guess it got lost."  No matter what the rocks looked like (but they are beauties), I was more than elated to get rocks and made a big fuss over them.  I realized that she really did feel badly about the heart-shaped rock she threw away a year ago.  Why she did that, I still don't know.  Maybe she had a hard day???  It all sounds silly when you think about it, but I was reminded again of what a sensitive and good friend she is down deep.  I wouldn't have been surprised if she came back that night last summer with a flashlight looking for my heart-shaped rock!!